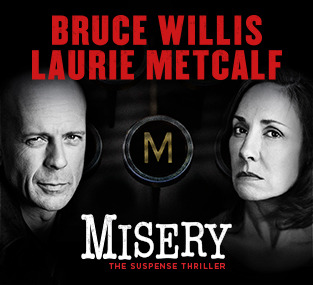 When you are in love with theatre, it’s impossible to go to New York and not see a show. Any show. The lights and the buzz around Broadway are all too tempting not to be lured in. Such big names as The Lion King, Phantom of The Opera, Matilda The Musical, etc etc are flashing on the big screens of  Times Square inviting you to come in and see for yourself some of the highlights on some of the world’s best stages.

I’m somewhat more of a play person rather than musicals. So, when going to the tickets office on Times Square, I just wanted to see a play. Any play. Somewhere in my memory there was a recollection of having seen ads for Misery that was showing in The Broadhurst Theatre on 44th Str. The screen outside the office box was announcing that there was a 50% discount for Misery that day.

The tickets were equally expensive for all the plays (it’s Broadway after all), so in for a penny, we thought… it’s not something we will be doing every night, so for the sake of one time let’s go big. And we settled on Misery.

In this version directed by Will Frears, Misery features such big names as Laurie Metcalf (playing Annie) and Bruce Willis (playing Paul Sheldon). This play, based on the same-name novel by Stephen King, tells the story of a famous chick-lit writer Paul Sheldon, who was rescued from an almost lethal car crash by Annie. Coincidentally, Annie isn’t only a good samaritan, she is also Sheldon’s fan number one (and there ain’t number two, according to her). Having both legs severely damaged in the accident, Sheldon has no choice but to be subdued to Annie’s 24h care. But it looks like the good old Annie might be after something more than just bringing back onto his feet the famous writer.

This suspense thriller is, without doubt, one of my favourite titles by King. And this production does it justice once and for all. The absolutely wonderful performances given by both actors on stage steals your heart from the very first minute. I must say that Metcalf is absolutely amazing as Annie. She doesn’t only show her mad side, but also reveals her beauty and humanity. Her performance made me feel sympathy towards this poor lady, who is trapped in the world of reality and fiction drama.

Willis himself isn’t bad at all. I’m not a fan and must admit that I had no expectations what so ever. But after finding out that it was his Broadway debut, I was pretty surprised. The first theatre role and such a challenging one. It’s not easy to sustain a 90 min performance being hugely restrained in movement and only able to move around only in a somewhat awkward wheelchair. And Willis did it believably and bravely well.

Another point that I can’t help but share is the set design. I understand that budget is a term pretty much non-existing on Broadway, but what David Korins did with the stage is simply amazing. An almost entire rotating house was built! I’ve never seen anything of that quality in my life. A very impressive decision it was that contributed not only as a set for the stage, but also as a set of mind. In a number of scenes the house was moving together with the actors either standing or moving with it, which created a beautiful feel of time, space and urgency.

Another thing that differs this play from those ones I would normally be used to in Dublin is that Misery had a soundtrack. Some really easily recognizable tunes added to the whole atmosphere of the piece.

Unfortunately, Misery has drawn its last curtain yesterday on February 14th. A performance that introduced me to Broadway shall never be forgotten. For more info about the play: http://www.miserybroadway.com/castcreative/